Philanthropy champion Ndaba Mandela has been named as the official brand ambassador for the Melisizwe Computer Project. 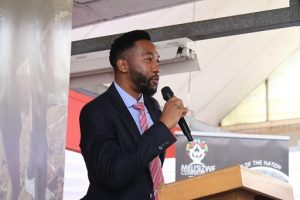 Mandela, who is the grandson of the late former president of South Africa Nelson Mandela founded the Africa Rising Foundation, an organisation dedicated to the continuous improvement of  the lives of the youth in South Africa.

Mandela says it is a great privilege for his organisation, to be part of the Melisizwe  Computer Project. He believes  providing learners with skills that will prepare them for the technological age is fundamental in reducing youth unemployment.

“We are honoured to be partners in bringing learners particularly from disadvantaged communities into the mainstream of the technology space,” says Mandela.

Committed to continuing his grandfather’s legacy Mandela will be joining the Melisizwe Computer Project to promote the development of 100 computer labs in 100 schools to honour Nelson Mandela’s centenary.

The Melisizwe Computer Project, established in 2012, has developed 10 computer labs in underprivileged school in South Africa, enabling learners access to computer Applications technology (CAT).The Initiative continues to narrow the technological divide, with the introduction of its sustainability programme which will give learners free access to courses in robotics, coding and media.