Rocked by recent protest action, Eldorado Park has been a hot pot of drugs, unemployment and disenfranchisement among its youth but on Lancea Vale Secondary School was the first of 67 schools to receive a fully equipped computer lab as part of the Melisizwe Computer Lab Project’s 67schoolsfor67minutes initiative in association with Kaya FM. 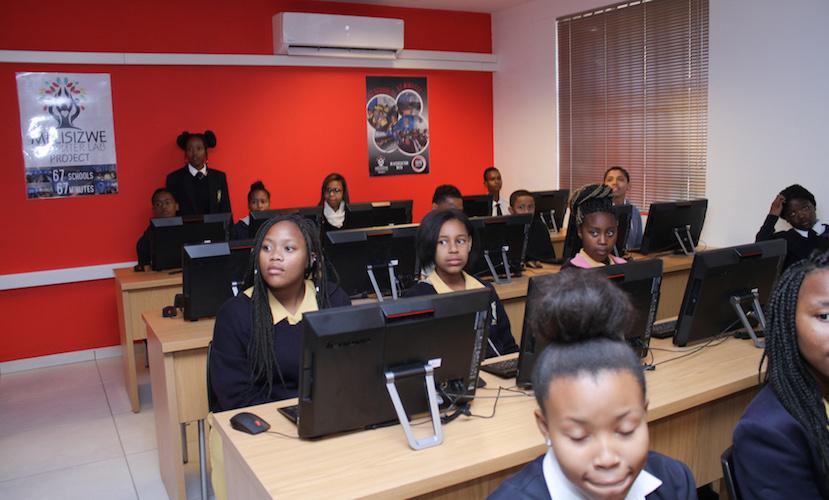 The hand over formed part of the launch for Mandela Month in celebration of Mandela Day on 18 July which aims to raise funds to equip 67 schools with computer infrastructure in order to give learners in under privileged schools an opportunity to study Computer Application Technology (CAT) as part of their curriculum.

School principle Mr Ashley Phillips says the school which accommodates 1312 learners is ecstatic about the new lab as it will give learners in the northern part of Eldorado Park an opportunity to study CAT. “Grade 10 learners in the 2018 academic year will for the first time be given a chance to compete with former model C schools and become part of an offering that will prepare them for a world that is driven by technology,” says Phillips. He believes that computer learning is no longer a secondary but primary need as it is essential in preparing leaners for the work or tertiary environment.

Director of the Melisizwe Computer Lab Project Candice Kern-Thomas says the project to date has given access to computer learning to over 5000 learners in eight schools in Gauteng with Missouri in Eldorado Park being the first in 2012. “It’s surreal being back in Eldorado Park to launch our 67schoolsfor67minutes campaign,” says Thomas-Kern. “The primary function of the Melisizwe Computer Lab Project is to provide infrastructure to underprivileged and indigent schools, however, we believe the impact has been far more meaningful with some learners being able to access employment and even going on to start their own businesses.”

Although Kern-Thomas concedes that raising funds for 67 schools is an ambitious target, she believes it is doable as companies are required to spend the funds as part of their Socio-Economic Development contribution and the impact of contributing towards computer infrastructure for indigent schools will not only have a lasting impact on the school but communities as well as the economy by reducing youth unemployment.